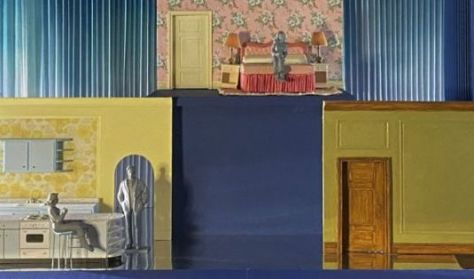 In the beginning, there was Michael Cunningham's 1998 Pulitzer Prize-winning novel, which Stephen Daldry made into a 2002 film that won Nicole Kidman an Oscar for her portrayal and included Meryl Streep among the rest of the cast.  more

In the beginning, there was Michael Cunningham's 1998 Pulitzer Prize-winning novel, which Stephen Daldry made into a 2002 film that won Nicole Kidman an Oscar for her portrayal and included Meryl Streep among the rest of the cast. Now, Kevin Puts has composed an opera to this work taking place across several timeframes that will have its world première at the Met: conducted by chief music director Yannick Nézet-Séguin and staged by Phelim McDermott, it stars Renée Fleming, Joyce DiDonato and Kelli O'Hara.

Three eras, three different life situations, three different female destinies — yet related to each other in terms of the difficulties, social expectations, spiritual burdens and inner demons the women must face. This is the formula that characterises the intimately familiar and so disturbing story of The Hours across the different genres, in which Virginia Woolf's novel Mrs Dalloway and the female giant of modern English literature herself both play prominent roles. This time around, the plot threads validly and sensitively articulating the themes of female existence, sexuality, as well as mental health (or illness) will be intertwined on the opera stage, thanks to the opera-writing efforts of Kevin Puts, who also won a Pulitzer in 2012 for his Silent Night, and his librettist, Greg Pierce. In the case of this world première for the stage, the task of directing the production, which entails more responsibility than usual, is being performed by Phelim McDermott, who most recently proved with his staging of the Philip Glass opera Akhnaten that his work can hardly be denied complex adjectives like "impressively captivating" or "of visionary force".

The 'Metropolitan Opera Live in HD' transmissions have been made possible through the cooperation of our partner, liveincinema.eu s.r.o.

This year marks the sixth anniversary of Malek Andi Soulistic, who have given us a new understanding of the sound…